An advertising video for a commercial companion robot for children illustrates the possible pitfalls when machines become social. Our blog post criticizes the advertised robot Moxie regarding that it reproduces a conservative image of the family, how it equips parents with surveillance technology and regarding practices, and how this leads to an alternative perspective on what it means to take care of a child.

On twitter we came across an advert for Moxie, a robot available through embodied.com which is introduced as a child’s companion. A tweet in which the advert was shared with the comment “this is a real ad!! oh no”. In addition, it had sparked a discussion about the eeriness of the device and maybe even more so the ad itself in the comments and replies. A feeling we instantly shared. With the analysis in this blog post we try to dig a bit deeper into our unease with Moxie and the way it is portrayed in the advert. This post is no critique of companion robots per se as these might have benefits (see for example this IEEE Spectrum Article on Moxie). Instead, we analyse how child care is portrayed in this advert, which aspirations it raises, and which role the robot plays. Our analysis is highly influenced through a feminist lens as we focus on the emotional labor portrayed here.

Reproducing a conservative image of the normal family

The ad opens up with a scene where we can see a 7 to 9-year-old boy Ryle, sitting alone in his room and holding a tablet. The mother stands in the door – the father in the back – and tries to approach her child by calling it. But Ryle does not react and swipes around – obviously bored – on his tablet. An oozing emotional melody tells us that this child is unhappy, maybe lonely, sitting in his golden cage with toys. So this robot ad starts with an underlying critique of existing digital technologies and their – here implicitly addressed – bad effects on child development, especially in social terms.

At first glance, the family portrayed in the video is a completely normal family. Maybe too much so? We are experiencing the story through a white, hetero core family, who appears to be rather well off as shown by the interior and the fact that they can afford a Moxie (which comes down to 1499 dollars with follow up monthly fees). All appear well and healthy, and all could be well if the kid would not appear withdrawn – but we will come to that later. The portrayal of the story remains conservative as the mother takes a leading role in child care and the household. While the father is around, he remains in the background. This happens both physically, as he always stands behind the mother and even hesitates to put a foot into the room until he is invited, but also figuratively regarding his role in the family as he does not interact directly with the child. He remains voiceless throughout and at the same time he is the one who proliferates the family with the critical resources of the situation, in this case, the robot and some books –  note, how the father passes the books to the mum who gives them to Riley! 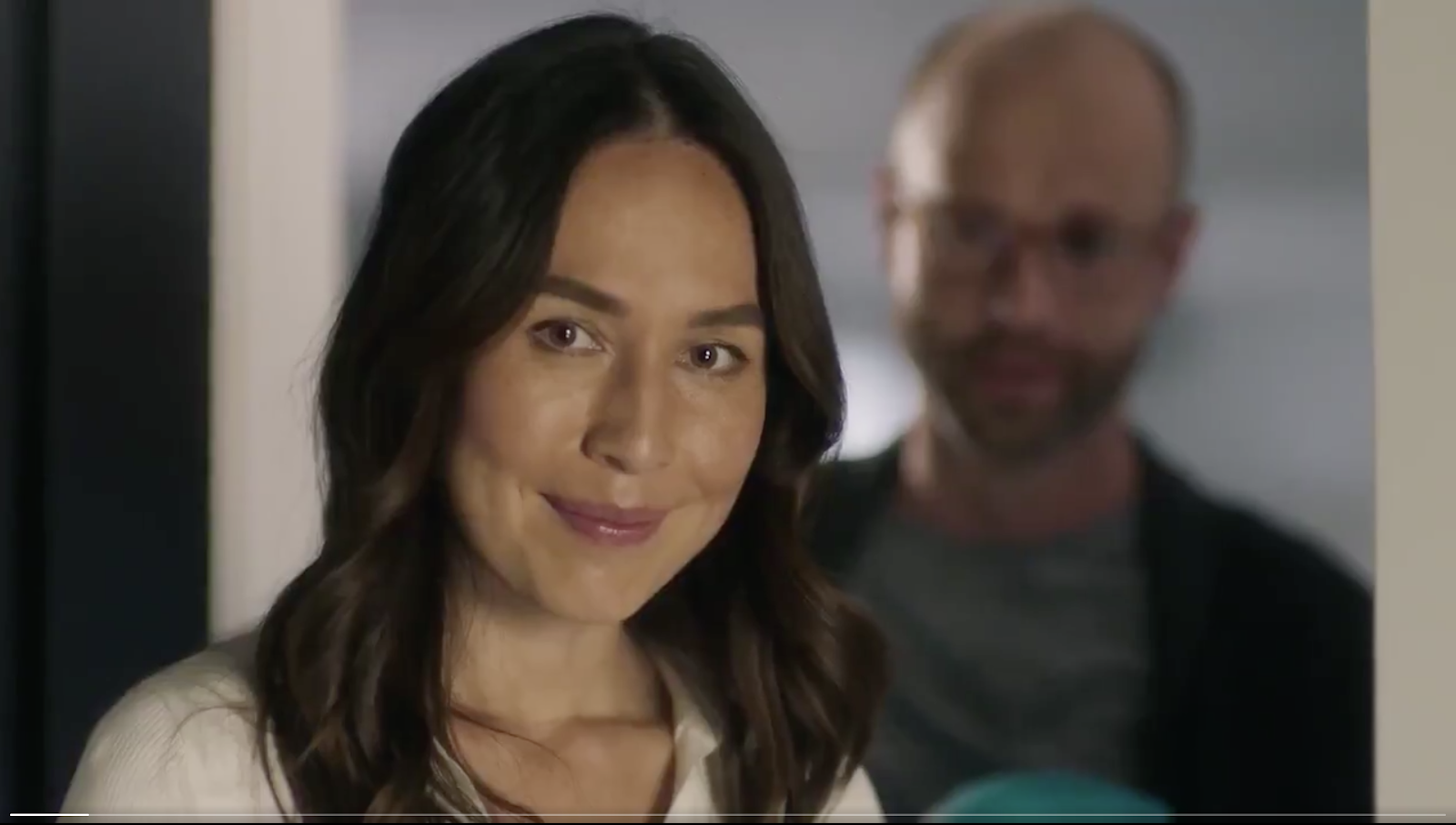 So, even though the father is engaged and interested, he is not involved in the actual child care but remains in the role of the provider. The mother takes a more active stance, as she introduces the robot, checks on the kid at night and clearly takes control of the schedule as a dentist appointment exemplifies. In short: she takes over the childcare. As such, the mother is also the one to reap the rewards of Moxie. This happens directly as she gets a lovely note from Riley telling her he loves her and it comes as no surprise that the kitchen counter is the first choice for Riley to hide this message. 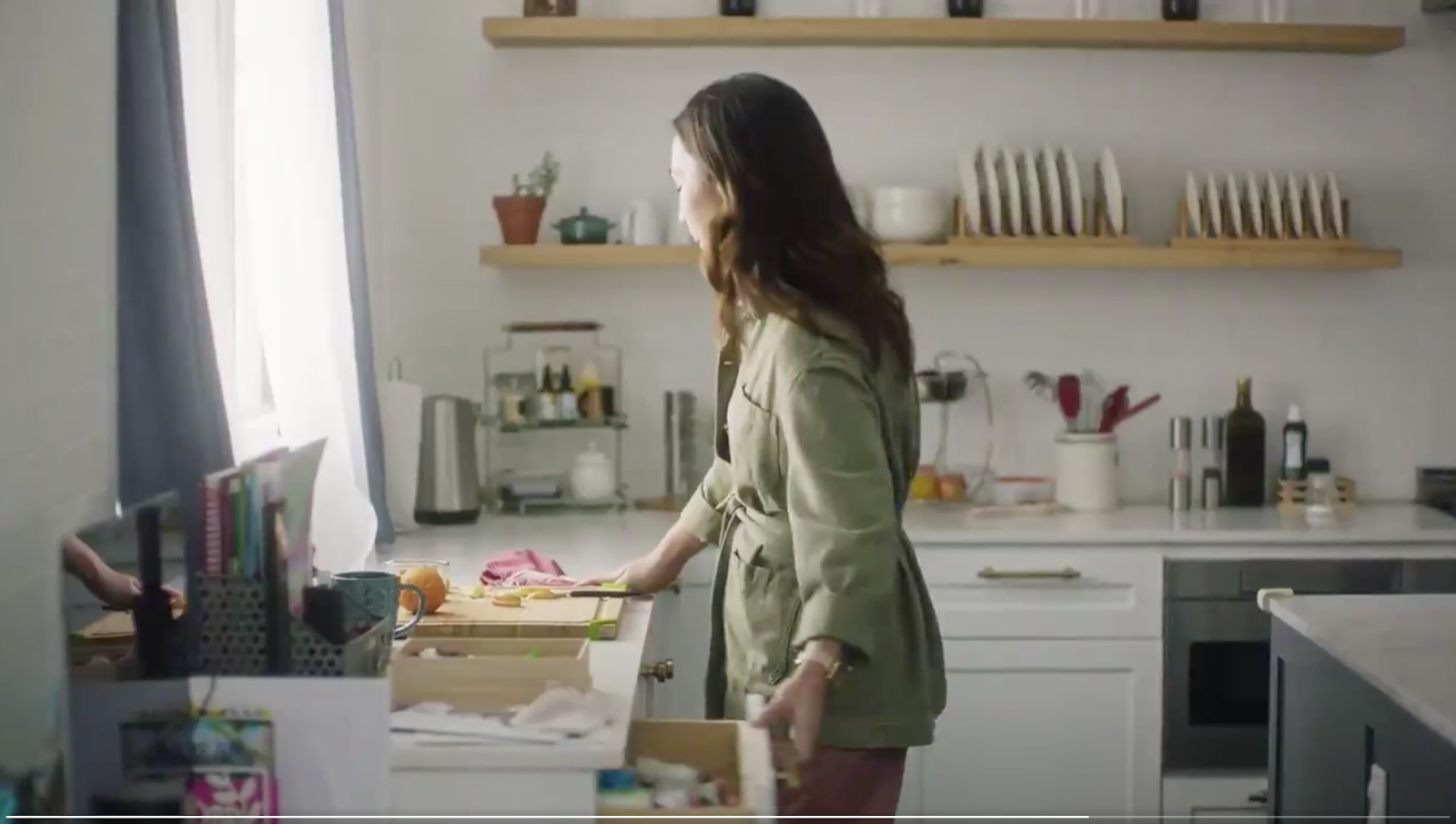 And this happens indirectly when she picks up a drawing that tells how the child had fun during the day with Moxie. This communicates two major benefits from Moxie: affection, but also peace of mind for all members of this small and happy core family.

Redefining care a as matter of surveillance and benchmarking

In one quite emotional scene, surrounded by fairy lights, we observe the emotional labour that the robot is able to fulfil, as the child tells them about a disappointing scene at school. While the parents are absent, the child is still able to get comfort through the interaction with the robot. James (1992) describes “care as organisation + physical labour + emotional labour”. Organisation contains the tasks needed to organise the work behind the care, i.e. to know and keep family appointments, organise the ingredients for family meals etc. As we outline below, this is still in the hands of the mother. It is even extended as she takes care of the robot now as well. Physical labour is all the labour surrounding care, such as washing, cooking, cleaning etc. and we also see that the mother is still engaged in these activities. So, the main part of activities in the care work that the robot takes over is emotional labour and the management of emotion around the child. As such the robot not only justifies its existence as a useful, caring object but also underlines the image we have of caregivers. Vincent & Braun (2013) describe the experiences of people being trained as caregivers to children and one point they raised was the “amount of work the students have to do on themselves to present an appropriately wholesome image as someone suitable to care for young children”. In this scene, Moxie does exactly this, as it establishes itself as a partner, who will deal with emotionally laden situations without fault. While it does not have the coldness associated with machinery and the ‘skills’ to deal with the situation, it does remain calm, professional and unlikely to step out of bounds at all. Thereby it revokes the image of the perfect nanny, a modern-day Mary Poppins. Through this, it raises questionable images of child care and holds parents and caregivers to unfulfillable standards.

But this distance from the child does not mean that the mother keeps her distance and gives the child the opportunity to make these appearances on their own. Through the accompanying app – of course, there is an app – the parents are able to observe the interactions the child has with Moxie. While this might be a reasonable wish from the parents, not to let their kid alone with a machine without control of the process, it also adds an element of surveillance to possibly every interaction. The way this is shown – covertly when the child is asleep – sets the expectation that it is acceptable to check up on the children through technical means without their knowledge. We can read on the project’s website, how far this form of surveillance and control can reach out: “The Parent App allows parents to set focus on developmental goals for their child, including cognitive, social, and emotional developmental goals, and to track their child’s progress with Moxie.” (https://embodied.com/pages/privacy-policy)

The robot, therefore, sits within an ever-growing market of products that facilitate surveillance and optimization of children, from baby sleep monitors (see e.g. Wang et al. for a critical overview) to GPS trackers (see e.g. this overview of the best 20 children’s trackers in 2020). Interestingly though, this product extends the debate from one that historically contrasts safety and privacy, with one that normalises the surveillance and control of one’s development even further as it is displayed as a legitimate wish of parents. While GPS trackers are framed with dangers to the child, such as accidents or even kidnapping, in the Moxie video no explicit danger is shown. Instead, surveillance and benchmarking are shown as a matter of care.

The displayed image of child care

Through Moxie we experience a success story as a comparison between the first and the last scene shows. In the beginning, we see a child who is engaged with a tablet. While not necessarily negative in itself, this is framed as problematic as the child does not respond immediately when the parents approach. The parents appear concerned – but hopeful as Moxie is introduced. The light in the room is subtly subdued. In the last scene, the child not only seeks interaction with the parents but also asks to invite other children as part of a challenge. The room has suitably lit up in the meantime to symbolize the change. Introverted behaviour – or maybe the wish to distance oneself from the parents – is clearly framed as problematic here. We see a danger in framing a child’s behavior that is only hinted at as so problematic that it needs extensive technological intervention. It places a burden on parents to look out for this behavior and potentially seek intervention – because it exists. To some extent, it might fall into the Big Brother effect of surveillance technology, where the existence of tools that allow one to always watch, raises the expectation that one should always be watching. Through Moxie, we see a shifting perspective of what care means in the context of childcare and how technologies can be part of it. Through this robot, we observe a normalization of surveillance of children’s behavior as part of the care work but also the outsourcing of emotional labor to technology. This stands in interesting contrast to other robots in care, such as elderly care. Many robots designed for elderly care follow a comparable line of argument that they help to reduce loneliness (see e.g. this clip from the BBC). In contrast to Moxie, the error is not placed on the elderly people, but on societal changes, particularly the increase of people in need of care. As Lipp has shown empirically, the field of care robotics is actively driven forward by a techno-politics of innovation, which attempts to build infrastructures, enable prototyping and create a translation between the incompatible fields of elderly care and robotics. As a result, there is less framing needed as to why the robot is needed as it responds to a societal problem. Therefore the robot in elderly care can often be more playful and entertaining, for example dancing with people. The interaction is more clearly framed as a momentarily interaction, rather than a “mission” to improve. Moxie, therefore, opens a new level of what companion/social robots are supposed to do and capable of. On their website they offer a “revolution in child development”, but it can be expected that the societal changes might be more incremental than that. While the robot promises to be a useful tool, rather than a toy, helping children with their development, its promises should be accompanied by a critical glance on what it promises – and what it might achieve.